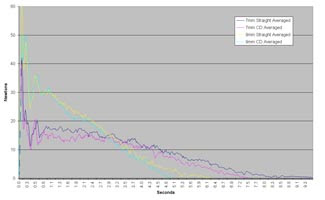 The update is here:

The tests were done in exactly the same fashion as the last set of static tests when comparing foam and water thrust.

In order to get back into flying we decided to have a go at launching multiple rockets simultaneously. Other than being lots of fun, one of the biggest problems was knowing which rocket you should be watching and the other things like nosecones falling off. 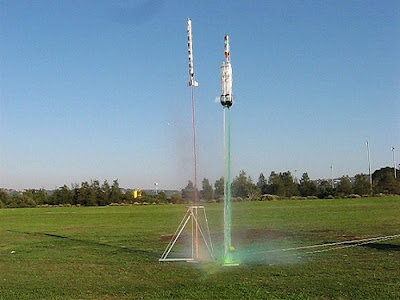 We then also flew a number of flights using the Jet foaming technique and 7 mm nozzles. The slow take-offs are quite a contrast to fully open nozzles using only water.

The update is here: http://www.aircommandrockets.com/day33.htm
The update also includes pictures and a video of the day's highlights.

We tested two CD nozzles this weekend. There were 12 tests in all:
Since it takes a bit of work to translate the video frames (around 6000 in total) into a spreadsheet it will take some time to do that. Once we have the data in a usable format we will publish it again. 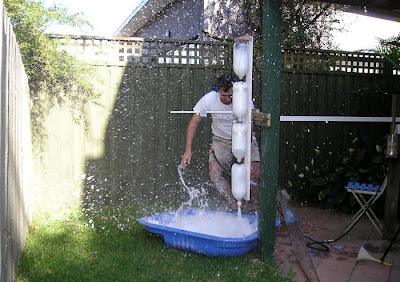 We went through almost a liter of bubble bath solution, but collected the water during the tests so it just didn't go onto the lawn.

In order to see if a water rocket can benefit from CD nozzles (de Laval nozzle) while using foam we have built a couple to hopefully test this weekend. 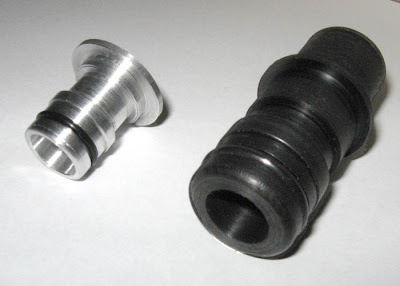 One is a 9mm nozzle (aluminium above) and the other a 7mm (black plastic). The divergent part is conical in shape and has a slope of 4 degrees from the centerline. This value was obtained by reviewing the video and seeing at what angle the spray emerges. The actual angle of the spray varies over time from quite wide to quite narrow near the end as the pressure drops.

We just want to test to see if there is a noticeable effect when a CD nozzle is used with foam compared to a straight through nozzle. If there is a difference, further tests will be performed to see how the shape can be optimised.

Well it has taken a while but we finally managed to get some good thrust data for a water-only water rocket and compare it to a water rocket using foam generated by our Jet Foaming technique.

The update includes the thrust data curves for 6 firings in total (3 water and 3 foam), as well as an analysis of the results. There is a video that shows how we measure the thrust. 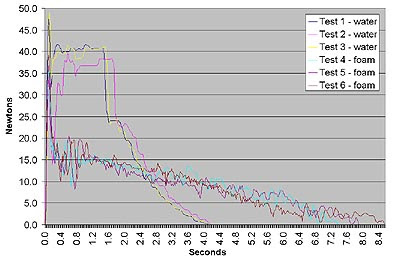 The write up is a bit lengthy but we wanted to make sure that as much data was available for others if they wanted to process the data further or use it in their designs.

Thrust Measurements for Water and Foam

We finally managed to get some good thrust data for water and for foam today. We ran three identical tests for water and three for foam so that we could see how reproducible the results are and how much the two differ. The only thing that differed was the addition of bubble bath to the mix, and use of our Jet Foaming technique to generate the foam. All rocket, pressure, water volume, and other parameters were as close to identical as possible in all the tests.

We were quite happy with the data and were quite surprised by the results. The data will be published on our website as soon as we are done processing the raw data, and had a chance to properly analyse it.

We finished building the water rocket thrust measuring rig today, and did four firings to test it out. The first two tests did not use any dampening on the lever arm and as a result it was virtually impossible to see the scale needle as it flew around so much. 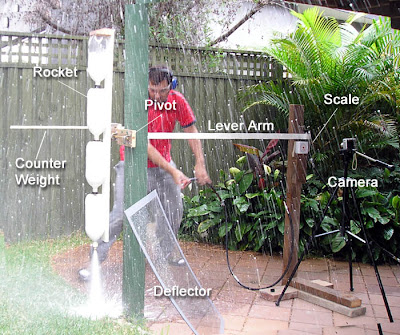 No Dampner in this photo

We then put a disk in a bucket of water on a long lightweight dowel mounted near the scale to act as dampner. This was suggested by Clifford Heath a while back and a similar technique was used by Antigravity Reaseach when they did their thrust measurement. The needle motion was much more steady. Thanks also to Jim Fackert for suggesting the camera pointed at the scale to take readings. We should also thank Gordon M, Richard W, David L, Trevor, Brian and others for useful suggestions on how to set up the thrust measurement rig. 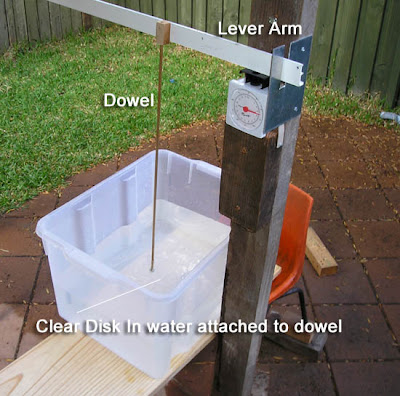 Dampner Added to lever arm
We have plotted the initial thrust curves of an 8L rocket with a 7mm nozzle using only water and then again using foam and the difference in curve shape was quite substantial. We will not publish these initial results just yet, as we would like to confirm the data by repeating the experiment a number of times and then averaging the results. Full data will be published once we obtain it. Hopefully in the next few days.

We test flew the Acceleron II booster (18.75 L capacity) three times this weekend with very good results. The encouraging results in the booster's almost always vertical launches means that we are ready to progress to the next stage of development - staging mechanism and the sustainer.

Full details can be found here:

We also took some measurements of the speed of the booster just after the start of the air pulse and had a close look at the sound the rocket generates in order to extract accurate timing of events during launch.

The twin parachutes also worked well to bring the booster to a safe landing each time.