This weekend we went out to Doonside to have a look at the site and help out with a bit of mowing to clear a new area for the launch pads. The new area is needed because huge piles of dirt have been pushed up against the permanent pads. Despite there being virtually no rain all week, the road was still impassible as the ground is still saturated with standing water especially near the entrance.

The aeroclub that used to fly on the other side of Doonside has been relocated to our area as well due to the construction, so some co-ordination will be needed but there is plenty of room for everyone so that shouldn't be a problem. Currently the next launch opportunity is July 4th so we are hoping to fly on the day.

After seeing the great high speed videos of water rockets made by Dr. Pitan Singhasaneh using a Casio Exilim EX-F1 camera (http://groups.yahoo.com/group/water-rockets/message/9248) We decided to get a high speed camera as well. Unfortunately the F1 is still too expensive here in Australia and so we decided to get it's baby brother the 9MP Casio Exilim FC-100. Overall it's a nice camera with some really cool features. I was really surprised at how small the whole thing is. Other than the 30 fps 1 second burst it can do - which will be great for launches, it can shoot HD video at 30fps, but also high speed video at 210, 420 and 1000 fps. The trade-off is the frame size decreases as fps goes up. The 1000fps is pretty useless due to the tiny frame size but for very specific tasks it may work. For the high speed shots lots of light is necessary otherwise the video is grainy. Both the 210 and 420 fps frame sizes are usable.

I've posted a video of some of the first tests here:
http://www.youtube.com/watch?v=2gIo6iQcRRs

We want to bring the camera with us for launching the big rocket. We have to decide though whether we want to film the launch in HD or high speed. The high speed is likely to be more interesting though.

We are currently in a holding pattern with launches for two reasons: The weather here in Sydney has not been co-operating in the last few weeks and the regular launch site at Doonside is currently undergoing construction. The heavy machinery has torn up the access road and with the rain it has made it impassable.

Here are some recent pictures of the site:
http://www.nswrocketry.org.au/gallery/2009_Launches/Doonside_2009_05/01_photos_May.html

We need to get in and help with the working bee to try to restore the site so it is suitable for launches and parking again, but due to the bad weather this was postponed again. The forecast for this weekend looks more promising with the rain stopping in the next day or so.

During earlier testing we found that a couple of the 13mm nozzles leaked slightly when the rocket was unpressurised. We are only talking a few drops of water. The o-ring grooves were fractionally too deep, and with the narrow o-rings this is more of an issue. When the boosters were pressurised the o-rings would seal properly. Dad decided to fix the issue and machined up a whole new set of nozzles.

We also decided against a guide rail for this rocket as there is no convenient place to secure it. We could attach it to the outside of one of the boosters, but it could cause more harm than good due to the potential uneven drag on that side of the rocket. The nozzles are quite long ~40mm and the fill tubes are quite a tight fit, so in the absence of a guide rail, the rocket straying from vertical could potentially wedge one of the nozzles on the fill tube causing all sorts of chaos.

We decided to machine out the top 30mm of the nozzle to be about 15mm in diameter and the nozzle hole itself by another 0.5mm. This allows the nozzle to pivot more without seizing on the fill tube. The 0.5mm increase to the nozzle gives about 8% more cross sectional area so we will get a little more thrust on take-off.

While we have been waiting for the weather to clear, we have done more static tests on the test stand of the membrane variable nozzle as a follow up to the tests done in March. We are in the process of putting all the data together at the moment so we will post all the results once they are in a meaningful form. All up there were 19 static firings made last weekend. (14 done in March)

After recent discussions on the Yahoo water rocket forum we decided to have a go at building a simple, remotely operated launch abort valve. The idea was to try to make it from commonly available components, and no need for special tools. The full details of the launch abort valve are here: 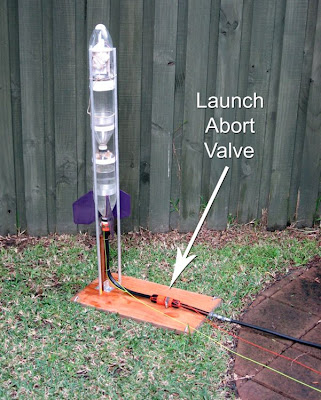 I've updated the build thread on the Australian Rocketry forum with some of the latest testing and build progress here:

The booster and sustainer are now mostly complete, still with a bunch of little things left to finish. So far the weather forecast looks good for the weekend so we have our fingers crossed. 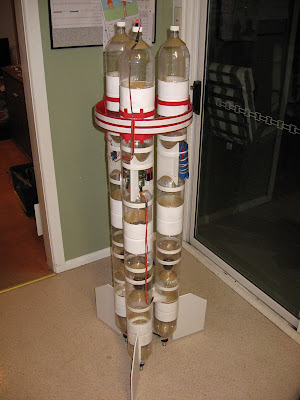 I'm not sure how many hours we've put into the rocket so far, but it is more than I had anticipated when we started the build. It is probably approaching around100 hours now. A lot of the time is spent thinking about how to solve particular problems, so hopefully the second time around a build should be much faster.
_____________________________
Posted by George Katz at 3:23 PM 7 comments

3 years ago today, dad and I built our first horizontal launcher, hooked it up to a scuba tank and launched our very first coke bottle in the back yard. A few days earlier after seeing a Mythbusters episode trying to disprove the Japanese video of a guy getting launched across the water, we looked up water rockets on the net and discovered a whole world of water rocketeers building all kinds of water rockets. And so the fun started....

Before we started collecting detailed flight data for each flight, we did about 60 launches of basic single bottle rockets. Since we started keeping records there have been a further total of 406 firings -
We are still enjoying the hobby, and have a long list of things we still want to try. A big thank you goes to the great water and pyro rocket communities that have prooved to be a very valuable resource in helping to design, build, test and fly rockets.
_______________________________
Posted by George Katz at 9:45 AM 3 comments

Rings, fins and other things

We had quite a busy weekend working on the rocket. The following has been completed:
Still left to do:
One of the main problems we've had is improving the yield of the splices at the 130psi range. Dad pressure tested the 9 spliced pairs to 130psi for 2 minutes during the week. Out of the 9, five were good. Two had very minor leaks of a few drops and a couple had more significant leaks. Dad had a go at sealing them from the inside with silicone and we are waiting to re-test them on Wednesday. We have about 7 spliced pairs currently that we need to test and get 4 good ones out of those. Otherwise there are still 2 good ones we have in the Polaron rocket should we need them.

There are still minor things to finish during the week, but most of the long lead time things are done.
The new ring brace can be seen in the image below (red with white stripes). The red Velcro strips around the bottles and lower section are only temporary at this stage to hold the rocket together as we work on it. It makes it easy to remove bits as needed and put them back.

In the photo below the rocket is still unpainted, but you can see the flight computer compartment on the right, and one of the parachutes on the left. 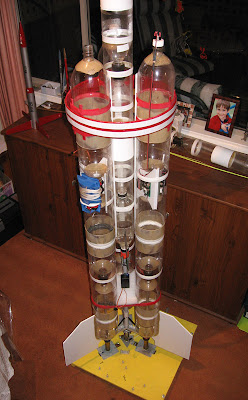 The new sustainer is a little shorter (about 6 inches) than the photo posted earlier in the month because we decided to put a Robinson coupling in the lowest bottle to generate foam in flight for a longer and more visible burn.