We've posted an update from the last launch day on our main website here:

We only flew a couple of smaller water rockets this weekend at the NSWRA launch day event, mostly due to the high wind conditions. A few of the pyro rocketeers lost their rockets somewhere over the adjoining suburb, so we decided to call it quits a little earlier too.

I'm putting together the launch report at the moment which should be available in the next few days. It also includes a progress update on the Acceleron V booster.

We did launch a couple of small pyro rockets with the boys and safely recovered those. During the week we bought a bigger pyro rocket kit from Suburban Rocketry so we are now building it with the boys in between all the other rocket stuff. I can see we'll probably be building a few of these as they are fun to build, but the cost of motors is pretty high when compared to air and water. :)

This weekend we spent a bit of time modeling Acceleron V to scale in 3DS Max in order to figure out the spacial relationships of the new release mechanism and the position of the staging mechanism. We now have a clear idea how to build the base support mechanism and what clearances are needed. The images below include the second stage, although the colour scheme will most likely be different. 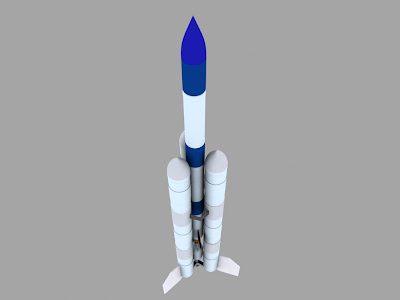 The length of the second stage has not been determined yet but will be such that the entire two stage rocket is stable in flight. 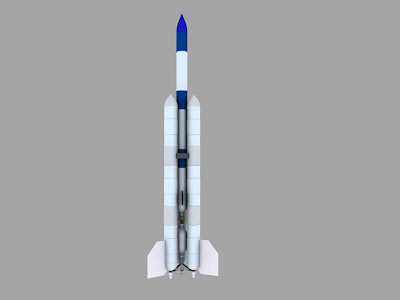 The rocket is designed to be launched from our drop away booster launcher. 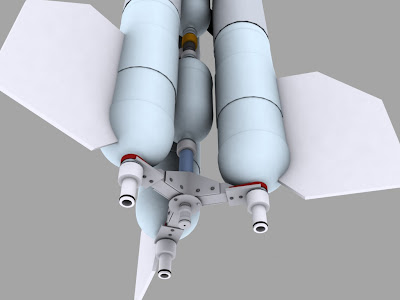 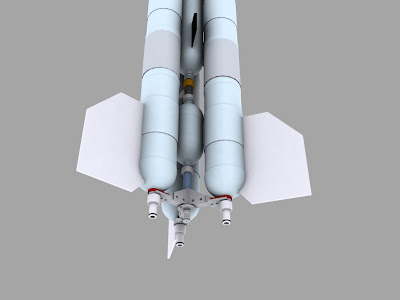 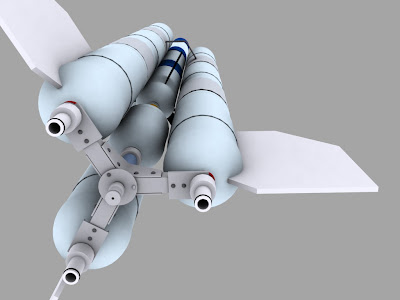 Fabrication of the booster segments continues, and we now have a materials list for the release mechanism so we can start construction on that as well. The staging pod is already finished. I'll post actual build pictures next time.

We've also been preparing our rockets for the next NSWRA launch day. There are no major new rocket changes although there are some experiments we want to run in getting more stable descent video as well as flying the whistling nozzle. After the last crash the Axion rocket has been rebuilt.
____________________________________
Posted by George Katz at 8:38 PM 2 comments

We've been collecting 2L bottles from friends and family over the last couple of months to make up more spliced pairs for the new Acceleron booster. After we had a few leak problems with the last spliced-pair batch we're now trying the sikaflex glue as a sealant in the joint area but PL premium as the main glue that holds the splice together. 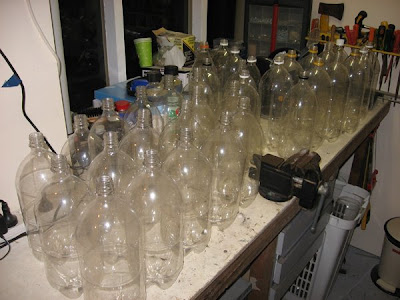 Some of the 2L bottles ready for processing 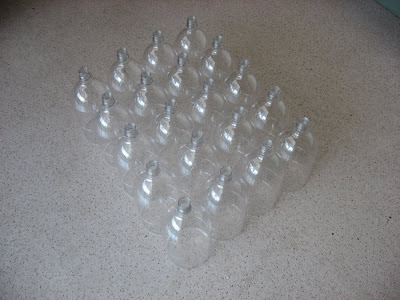 Bottles cleaned, trimmed and curled ready for sanding.
All up Acceleron V has three segments in the cluster and each segment uses 3 x 2L spliced pairs giving a total volume of almost 33 liters. Up until now we have been using 10mm nozzles on the Acceleron boosters but with the larger volume and larger weight of water we have decided to go with the larger 13mm nozzles we use with our drop away boosters. Including the second stage, the total liftoff weight is now going to be approaching 16 kilos. Switching to the new nozzles would have also meant that we would have to machine new nozzle seats for the old Acceleron launcher.

Instead we decided to adapt the booster launcher to work with the Acceleron rocket. The old Acceleron rocket uses a speargun release mechanism, so we are replacing this with custom made aluminium gardena nozzle mounted on the baseplate that holds the cluster together. This nozzle will fit into the existing Gardena central release head.

The second stage will be pressurised through the central release head allowing it to use a different pressure to the 1st stage. The Acceleron parachute(s) will now be located in the space between the spliced pairs.