This past week we have been making repairs to the Polaron V rocket as well as doing some new development for Acceleron.

All the plastic retaining tubes have been removed from the Polaron V main stage. On inspection one other tube was cracked (other than those that were shredded) . Because of the forces involved we didn't want to take any more chances with plastic, so we replaced them with thin walled brass tubes. Although adding a little more weight, they should be up to the job. We will need to do some tests first though before giving them the all clear. We are giving the PL a week to fully cure. Other than the tube replacement the rest of the rocket and boosters are ready to go. The plan is to launch the rocket at the next NSWRA launch event in a couple of weeks time.

Acceleron has been mostly repaired with the exception of the staging mechanism. Over the last month or so we have been working on yet another staging mechanism, and with the repairs needing to be done for Acceleron's staging mechanism we decided to complete it and put on Acceleron IV. We still have a long way to go with it, and need to do more testing, but so far the development has been going well. I will post full details once it has flown. It is a lot more compact and lighter than what was used on Acceleron previously.

Since we are rebuilding the staging mechanism it was a good opportunity to upgrade the Tachyon sustainer. We are building a completely new sustainer that has ~30% more capacity, more streamlined shape and new parachute deployment based on V1.5 of the flight computer. The fin section now integrates a ring fin with 4 smaller conventional fins. The ring fin struts are made from 6mm carbon fiber tubing and act as supports for the sustainer during the boost phase. The sustainer also carries both the altimeter and camera. As of last night the pressure chamber (3.35L capacity) is now complete, as are the 4 fins.

The details from the last launch day have been uploaded to the main site:

Although it was a less than optimal day in terms of requiring repairs, we had a great day launching with other NSWRA members and even reached our highest directly measured altitude. With the same flight we also achieved our longest duration flight.

Repairs are already underway, and we are looking forward to the next launch day to fly Polaron V again. 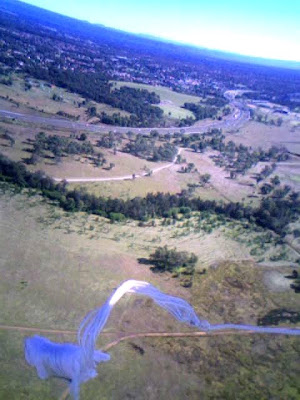