We tested the new launcher this weekend with a couple of small rockets at the local park. It is very easy to setup and pack up again. Transportation is a lot easier as well. I've posted an update on our main site with details on how it works, as well as a video showing how it's set up and used.

The update is available here: http://www.aircommandrockets.com/day104.htm 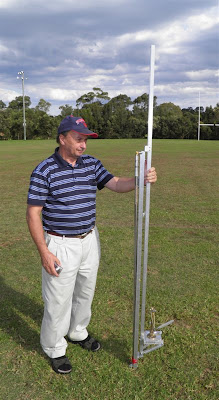 The Quick Launcher in it's packed up configuration.

We also test flew our first HD camera on a rocket. For the $40 we paid for it, it produces pretty nice quality video and it's lightweight. The above update includes a couple of videos from the camera, though it's lower quality because YouTube re-compresses it. 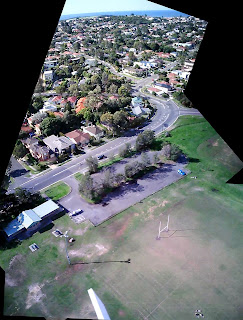 Panorama constructed from 3 images from the HD camera.
Posted by George Katz at 9:41 PM 7 comments

This week we've been repairing the damage to the G2 rocket. Last night I finished the G2 backup parachute system. The fairing is new as is the coreflute framework. I straightened all the bent pins on the electronics and resoldered all the severed wires and fitted new connectors. I also replaced the 3 Lipo batteries. All the electronics are the same from the original rocket including the servo motor. Despite being scattered in a wide area in the explosion, it's surprising that all the important bits survived. That's around $200 worth of electronics. I'm still waiting for the camera and micro SD cards to be delivered hopefully this week. 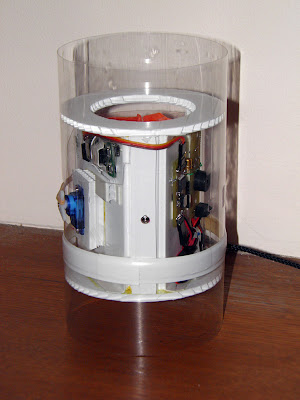 Repaired Backup parachute system with altimeter.
The main deployment mechanism is also pretty much repaired and only needing a new coat of paint. There was only minor fiberglass damage to the body.

Damaging the medium launcher in the explosion is giving us the opportunity to redesign the launcher. The new launcher is going to be a single rail design and the rocket will use buttons to attach to the rail. The main driving principle for this launcher is quick setup and portability. The medium launcher although very versatile was taking around 10 minutes to set up and 10 minutes to take down. The new launcher should be about 2 minutes.
Posted by George Katz at 9:15 AM 1 comments

We had an interesting weekend this week. We finished the new Polaron G2 rocket, and took it out for a launch. Unfortunately things did not quite go according to the script.

The full flight day report gives details how we created a nice sculpture for the rocket range. 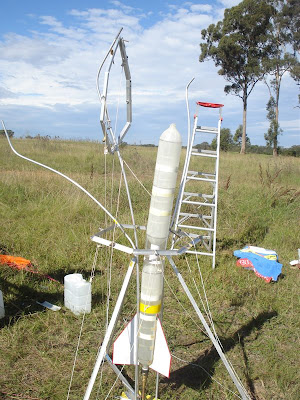 The report includes a highlights video including the CATO in slow-mo.The rocket and launcher are already being rebuilt and we will have another go again soon. The website update also has more detailed photos of the new side deploy mechanism and payload bay with a backup parachute.
Posted by George Katz at 9:45 PM 11 comments