We've had a quiet week this week, with dad in Europe and I've been busy fixing gutters and do ing paving, there wasn't a lot of time for rockets this week.

I did pressure test the two untested spliced pairs of bottles up to 115psi, and they both held well. We are reluctant to push them too far so that we don't have to rebuild them.

I also pressure tested the Hyperon rocket again to 130psi. And again it held up well to the pressure. I had disassembled a part of it during the week and needed to make sure it still sealed well.

I have finally received the CR123A Lithium batteries I bought on eBay this week. At $1.38 including delivery is pretty inexpensive. I tested them with the new flight computers and they work well. I was surprised that they are relatively light for their size. Since I don't have a battery holder for them, nor could I find one at the local electronics store, I have resorted to simply taping the contacts on with electrical tape. I realise this is less than desirable, but it seems to be holding well, so we will go with it for now.

We have updated the main site with our latest water rocket developments.
The update is available here:

The update includes more details about a standardised rocket platform we are developing for doing a number of experiments.

A video is included that shows how we make our Robinson couplings.
Posted by George Katz at 10:42 PM 0 comments

This week we have been doing a bit of analysis of the Acceleron IIIb flights we captured on video. We noted a few things:

1. It looks as if the stage separation was taking place a little later than we would have liked. The booster was already slowing down when the release happened. This can be seen at the top of the flight path as the booster starts pitching over. Since the release sequence is initiated by the pressure switch, we will need to make the pressure switch activate at slightly higher pressure. We can adjust the tension on the spring of the TDD, or alternatively add slightly less water to that segment with the pressure switch. Less water means that the segment will stop producing thrust slightly sooner compared to the other two segments that are still accelerating the rocket.

2. We now have a better idea of the time it takes to get to apogee and hence can set the parachute deploy delay for the sustainer appropriately. The parachute deployed about 2.5 seconds after passing through apogee.

3. The parachute deploy delay for the booster will be shortened as even the minimum setting allowed by the software on the day wasn't quite enough.

4. After release the booster looks like it falls more like a back-gliding rocket. It actually saved us a whole lot of work after the first launch since the parachute deployed so late. This is actually a favourable feature because if the parachute fails the rocket should land at a lower rate than if it hit nose first.

We have also been continuing with the next iteration of the flight computer. We are trying to reduce its weight and foot print to make the whole deployment system smaller and lighter. 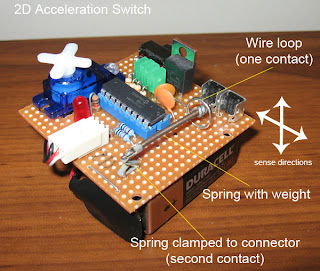 The full details of the 2 stage rocket are now available here:

There are lots of photos and a video as well showing the day's highlights. The in-flight video turned out quite well.