With Christmas celebrations mostly over, dad and I put together a short video today that describes how the Shadow's launcher works and how the rocket is loaded onto the launcher. I've added the video to the latest Shadow update here:

http://www.aircommandrockets.com/shadow.htm#_171211
Other than that there really hasn't been much happening with all the lead up to the holidays. I've added a few links to Facebook and Google+ from our main website. These will be updated regularly with latest developments as well so if you prefer to receive updates that way or just want to chat about rockets then those should make it easier.

Here is The Shadow with a fresh coat of paint: 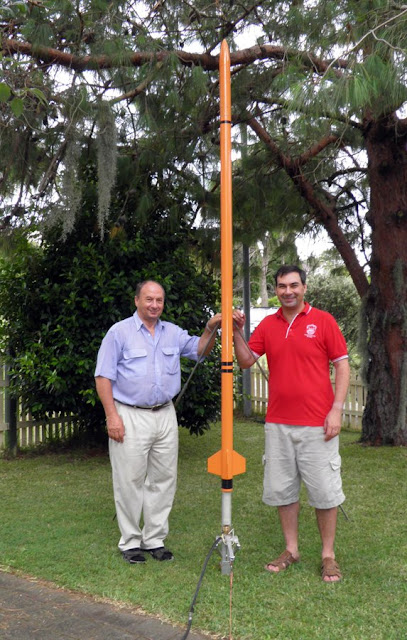 We all know we want one of these for Christmas 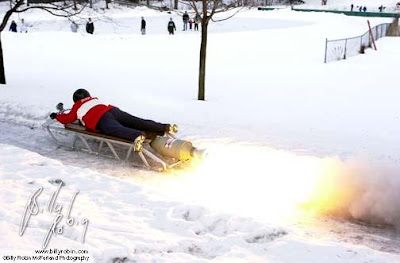 We wish you and your family all the best for Christmas and also into the new year!
Unfortunately we've run out of time to launch The Shadow this year, but we should get a chance to launch it at the next NSWRA launch in January. The quiet time over Christmas should allow us to also complete a couple of other projects that we've been working on. I'll post more on those when done.

The Shadow - coming together

We've been flat out over the last couple of weeks, but have had time to work a little on the Shadow. We've now finished the launcher, and the fins are now also attached to the rocket. The nosecone and payload bay have been painted which will make them easier to find should they separate from the rocket.

In the next week or so we should have the rest of the payload bay complete with the camera, altimeter and batteries still to be mounted. The rocket at least is now starting to look like a real rocket. :)

I've update the build log with a few pictures from the last couple of weeks.
http://www.aircommandrockets.com/shadow.htm#_061211 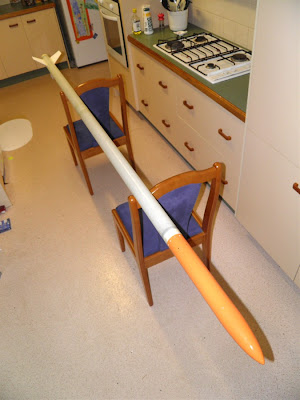 This weekend we went down to the local park to fly a pair of smaller rockets to test a couple of techniques for reefing a parachute to stop it opening too quickly during high speed deploys. The first technique used the old reefing ring approach and for the second experiment we simply twisted the shroud lines. We managed to fit in a total of 6 flights before the wind picked up.

We’ve written up the results from the experiments here:
http://www.AirCommandRockets.com/day114.htm

The update includes a video that shows how the reefing works in flight. 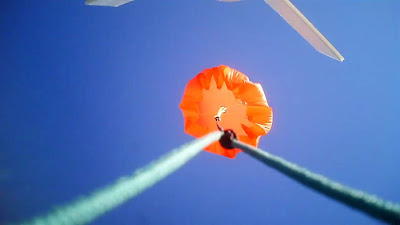 Reefing ring preventing the parachute from opening too quickly.
Posted by George Katz at 9:50 PM 3 comments