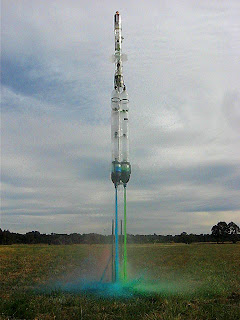 We had a fantastic day of launching the big 2 stage rocket today. We flew it three times in total before we packed up. Both first and second stages behaved well and we got some great inflight video looking back from the sustainer.

The weather was great too with very little wind and mild temperatures.

I will post full details, photos and videos shortly.

We have updated the main website with details of the Acceleron IIIb booster, the Tachyon II sustainer as well as the Flight computer used by the booster. The update also includes the burst test results.

The update can be found here: 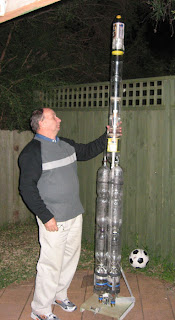 Well its two weeks to the day, and we have finished reassembling Acceleron III. There are still little things to be done, but the bulk of the work in doing the rebuild has been done. We need to carry out pressure tests again (this time we will make sure the camera is rolling) and also a full system test during which we had the failure.

Details of the rebuild and the burst tests will be published soon on our website.

This week we tested the 2L bottles we use for the Acceleron III rocket. After the failure a couple of weeks back we wanted to see what these particular bottles can hold. We also did a test with a coupling as we suspect it was a bottle that failed near a coupling.

The burst pressures were at 165psi which is about what we found with other 2L bottles tested earlier. We also pressurised one to 130psi and held it there for 3 minutes. After three minutes we started increasing the pressure and it burst at around 150psi. Therefore we will drop the operational pressure of the rocket to 110psi until we start reinforcing the bottles.

We are now in the process of getting more bottles since 5 of them were tested to destruction and can't be used of course. We need about 8 more bottles which we should have this week.

This weekend we spent a few hours on the rebuild of the Acceleron III booster. The booster is now completely disassembled. We can reuse three of the lowest bottles from the booster so that's good. They were new anyway and don't show signs of excessive stress. We made a new base-base coupling to replace the lost one. We replaced all the regular bottle caps used in some of the couplings with longer thread ones and put reinforcing rings on those. This was done for additional reliability, as we have had the smaller lids let go on previous occasions with other rockets. The pod is now also repaired.

One of the things that was quite apparent before the explosion was that the sustainer had quite a wobble to it when it was sitting in the staging mechanism. A number of fellow wrocketeers mentioned that the sustainer could snap off during take off, so we took their advice and started adding better support for the sustainer. This is now mostly complete, but we had to remove the fin assembly on Tachyon and will have to attach fins a different way.

Yesterday, we had a catastrophic failure of the Acceleron III booster while pressure testing the entire system. There was a pretty loud boom that echoed through the neighbourhood. Full details of the test and what happened will be posted along with pictures in the next couple of days.

Most of the components can be recovered and we have already started making repairs. Hopefully in two weeks we should be able to have it fully rebuilt again.