After a short break from building water rockets to catch up on a number of other projects, we decided to take the Polaron G2 for an airing again. The launch conditions were great today with blue skies and virtually no wind. The rocket configuration was identical to the previous flight. We launched the rocket twice, once at 230psi and once at 240psi. The rocket performed really well with good deploys just past apogee and both the primary and backup parachutes opening right on cue on both flights. 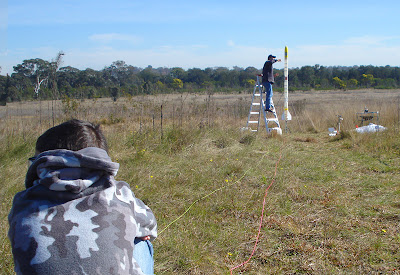 Turning on electronics prior to pressurising.
Paul at the ready to arm and launch the rocket.
We'll do a full write up with more photos and video on our main website in the next few days.
Posted by George Katz at 7:09 PM 1 comments

This weekend we trialled our Pan Cam to try to get a different perspective on a water rocket launch. The camera is set up on a tripod and controlled by an RC servo, so that when the rocket launches the camera pans with the rocket to keep it in frame.

We were happy with how the videos turned out. The full details and video have been posted on our main website here:

Update: The original concept of the panning camera for a water rocket triggered by launch was first developed by wyldbytes. He presents his idea here: http://www.wyldbytes.co.uk/?p=225 as a part of an automated and servo controlled launch trigger. A video demonstrating the concept is here: http://youtu.be/F284FmfZuMI


This is the Pan Cam camera: 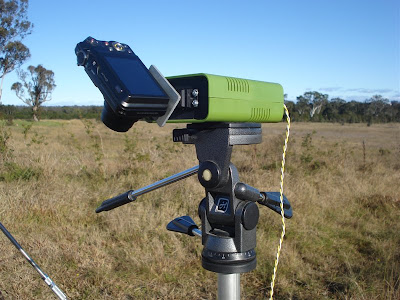 Here is a captured video frame from the camera: 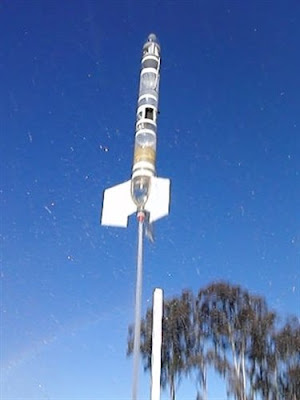 I've done a quick update on the main site from the last test flight launch day: 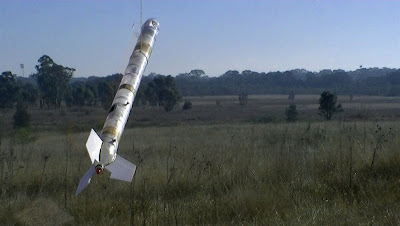 The last couple of weeks have been really busy with the timers so not a whole lot of new rocket development has been happening. We want to thank everyone for their support on the timers. We ran out of stock from the initial run a lot sooner than we thought, but new parts were ordered over the weekend so hopefully they should start arriving shortly, and the timers will be available again soon after that. Some of the components come from the US and some from the UK.
Posted by George Katz at 8:47 AM 2 comments