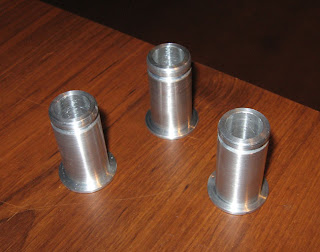 We have been working on Polaron IV and its launcher in the background while doing the foam experiments. We have further refined plans now on how the boosters will be attached and how they will separate. The photo above shows three newly machined 13mm aluminium nozzles for the boosters.

Each booster is 90mm wide, 2.3L capacity weighs ~150grams dry including recovery system, has a 13mm nozzle and uses a 450mm launch tube.

The simulator predicts that individually each booster should reach about 130m (430') @ 120psi, however, each of the boosters is intended to lift an additional 900 gram weight. This additional weight being a third of the total weight of the main stage fully loaded with water. Under these conditions the predicted altitude of each booster is around 35m (120'). Giving the main stage a release velocity of ~ 25 m/s.

At 120psi, each booster will produce around 90N of thrust at release and about 190N at the end of the launch tube. That is a combined booster thrust of around 570N as the rocket clears the launch pad. Compare that to the Main stage that will produce around 55N thrust with water only and likely around 35N with foam. From static experiments we found that the main stage should thrust for about 6-7 seconds. Rough estimates for main stage altitude are around 230m (750') at the 120psi level. Actual flight though may vary from this figure if the rocket does not go vertically.

We have updated our main site with the results of the foam vs. water-only test flights.

In the analysis we show that foam flights were about 2-3% lower in altitude than the water only rockets. This was a little dissapointing but also encouraging in other ways and certainly gives us a direction for further research with foam. Since the update We tweaked the simulation's drag coefficient and nozzle loss factor so the simulation matched the highest observed water-only flight altitude. We then added the weight and drag of the attached camera, upped the pressure to 120psi and ran the simulation again. The predicted water-only altitude was 350'. The last camera mission on the day was a foam flight with the camera and the altimeter. The altitude measured was 353'. This would put foam on par with water-only.

The altitudes are too close together to be able to make any definitive conclusions one way or another, and a lot more flights are required.

There are a few reasons we want to pursue foam experiments further: 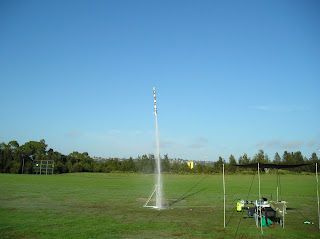 We had an excellent flight day on Sunday. The weather was ideal and none of the rockets crashed. We tested the water-only vs foam flights and got altimeter data for all of them. Virtually all the flights were vertical.

I am in the process of doing a full web update but it will take a day or two to collate all the data and get the videos updated.

The update will also cover bottle reinforcing techniques and their results.

Most of this week has been spent working on a new design for the flight computer. As mentioned in the web update a couple of weeks back, we want to make it more automated to enable remote operation. We are building our own IR remote so that we can have full control over its operation. Most of that hardware is now designed and part of the remote's software has been written.

Most of the design for this new hardware is now complete, with about half of the software still to be written.

We have now repaired J4III's body and fins, and are in the process of remounting components in the payload bay in order to protect them better during impact. J4III will now also sport the new shock absorbing nosecone to help provide even more protection should the parachute fail.

We have also made our first jacketed bottle that includes a Robinson coupling. We have pressure tested it to 100psi to check for leaks around the coupling, but will need to burst test it to see how much it can actually hold. If the burst tests are successful we would be aiming for launch pressures of around 180psi. While we believe the bottle burst pressure will be around 220psi+ the Robinson coupling is the biggest unknown.

This week we continued working on the stager mechanism. We finished enough of it to test it staging just in the back yard. We used only air at 20psi a couple of times and at 50psi once. Although it worked it was a little stiff to release and that is something we need to look at. We will probably try softer o-rings first. We still have a major design issue to resolve, but have some ideas. (More on this later)

The camera that wasn't behaving during the last launch day appears to be OK, and the cause looks like a poor battery contact. The contacts must have become more compressed inside the camera. We tried it with another battery that has taller solder blobs on the contacts and that worked fine, even when shaking the camera.

We also had a go at building the first prototype of the shock absorbing nosecone. It basically consists of the top 3/4 of a PET bottle which is filled with soft foam. The sides of the bottle have 8 longitudinal cuts all the way around that allow the bottle to easily split and slide over the existing nosecone. It is lightly taped over the top to enable the tape to separate easily on impact. During a crash the padded nosecone slides down and the foam compresses against the internal nosecone, but also the whole thing acts as an air piston to dampen the shock even more. The prototype weighs 35 grams so not a very significant weight penalty. For record flights, this can be removed and the existing nosecone underneath can just be used.

We have also been on the lookout for new launch sites around Sydney with great help from the local rocketry community. We looked at one location (George Kendall Reserve) that looks pretty good and is only about half hour from home.